Skip to content
0 Shares
Share
Tweet
A video of a teacher at a public school in Caloocan slapping one of the students and using profanity, has gone viral.
Mike (not his real name) narrated that they were playing some music inside the classroom using loud speakers when their teacher walked in. She got upset, closed the door and confiscated the speakers. 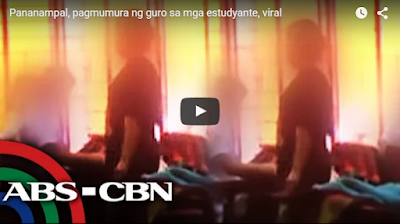 The 15-year-old student and his classmate apologized to their teacher and requested if they can have their speakers back. But the teacher in question went ballistic and slapped Mike. She also told everyone that she can easily tell a different story about what happened.

Initially, Mike’s mother didn’t want to pursue or file a complaint against the teacher. However, when the teacher told a different story of what really happened saying that Mike was the one who instigated the heated encounter, Mike’s mother decided to let the truth prevail.
She approached the Department of Education to formally file a complaint against the teacher. DepEd tried calling and texting the now infamous teacher but all were ignored.