Skip to content
0 Shares
Share
Tweet
Honesty is the best policy, a saying other people may no longer believe as they deemed it old school. But not for an 11-year old girl who returned a THB5 extra change from a 7-Eleven store a month ago. 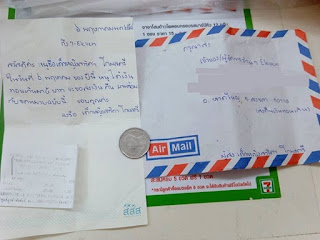 The honest little girl made an effort to return the THB5 coin given to her accidentally by a store employee of a 7-Eleven branch in Songkhla province, with a letter addressed to the store manager. The letter was recieved and a snapshot of the envelope was shared yesterday by Facebook user “Fern Ki,” an employee who worked at the said branch.
Gettting exra change might be a chance. But returning is a choice. The envelope said it was from a little girl who still uses the title “Dek Ying,” Coconuts Bangkok reported.
“Sawasdee Ka. My name is Dek Ying Sarisa Komoltri. On May 6 of this year, you gave me extra change, so I am returning it to you with this letter. Thank you.”
The employee shared it to the popular Youlike community and praised the girl.
“She will be another fine adult when she grows up,” Fern wrote.