Skip to content
0 Shares
Share
Tweet
The crackdowns on prostitution, pornography, traffic, gambling, etc., were proved to be fruitless since they don’t show any signs of improvement, at least that’s the way I see it therefore, you can always question that. But once city official has an approach that others haven’t tried yet or perhaps not even have a slightest idea that will work. 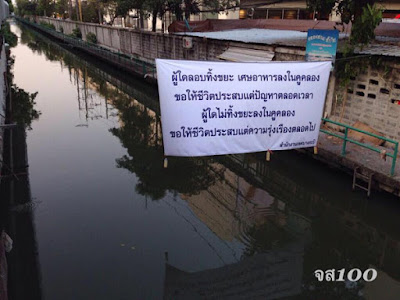 It’s called the superstitious approach!
After the post putting up a sign cursing people who don’t care as to where to drop their garbage on Friday, Lat Krabang district chief said that his wonderful solution already made wonders before.
According to District Chief Sin Nitithadakul on Saturday his approached to superstitious worked when he was chief of Bang Kapi district. What he did in Bang Kapi was exactly the same in Lat Krabang: jinxing people who litter!
The sign was put because residents living near Saen Saeb canal completely brushed off the warning that littering would be fined with TH10,000 last year. Sin said Thai people believe in superstitious, thus, he knew they would be scared to do what they do.
“Those who dump their garbage and leftovers in the canal, we wish you would always face obstacles in life. Those who don’t litter, we wish you eternal success.”
Sin said the amount of garbage in the canal actually decreased, and he was later moved to oversee Lat Krabang district where he decided to continue jinxing the public, Morning News reported.
If you happen to see a sign like that, would you dare litter?
Source: Morning News, Coconuts Bangkok
Facebook Comments
0 Shares
Share
Tweet