Skip to content
18 Shares
Share
Tweet
A video of a student using profanity at his foreign teacher has surfaced online. It was uploaded to social media sites and received outraged among internet users.
The 56-second clip shows a student who was about 15, speaking rudely at the teacher. He was smiling and looking at the camera whilst sitting opposite his teacher who was jotting down notes during a break. 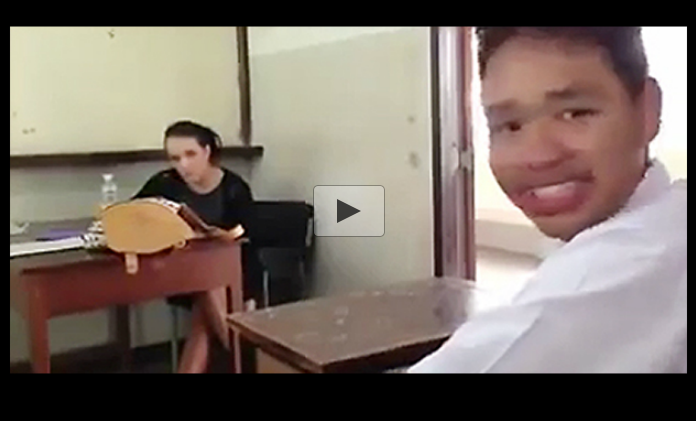 His words:
“They’re hiring you to teach. Why the “F” do you scratch your foot? Do your work! This is my country. Understand?
“I’m scolding you and you still don’t look at me. Animal! Monitor Lizard? Look at me!
“You’re wearing black. Are you going to your father’s funeral?
“You’re scratching your foot again. You have no manners.”
It appears the teacher didn’t understand what her student was saying. Well, he was speaking in Thai. She looked at him once and later ignored him. The other students can be heard laughing in the background.
Some people who saw the video reacted by posting their comments.
“This video clip should be seen by the student’s parents. He sure won’t bring a good future to the country,” wrote Jarukit Jitpentham.
“The student is a monitor lizard. If the teacher swears at you in in English, would you understand?” Facebook user Orawan Tipsungwan wrote.