Skip to content
0 Shares
Share
Tweet
I was a fan of Malee juices sold from big supermarkets like Big C and Tesco Lotus to local and small stores across the street. I used to have a small cartoon of orange juice everyday before I go to my class. But when I found out they have fungus in a carton of tomato juice, I’m kinda like having a second thought if I’m gonna try to have one again. 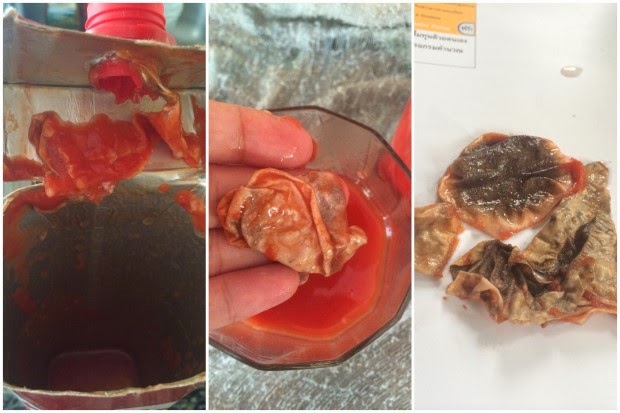 A report from Bangkok Post said that Malee Sampran Plc, the maker of Malee fruit juices, has apologized after a customer found a fungus in one of their tomato juices.
Photos of the fungus (above) were first posted on Thai online forum Pantip.com by a member who was later identified as Kathatorn Assawajiratthikorn, deputy chief of Channel 7’s news department.
Mr. Kathathorn said he bought the carton juice in a department store. The fungus later appeared when he squeezed out the carton’s last few drops.
“Later I thought it was probably some kind of fungus because after I dried it in the sun, it appeared wilted. If it was rubber, the condition should remain the same,” Kathathorn told Isra News Agency.
A “micro leak” or tiny puncture might be the reason for the fungus to grow inside the box. The air could get in, but the juice couldn’t escape. The oxygen could have encouraged the growth of microbes inside the tomato juice carton, the company said on their website.
The company speculated that the puncture might have occurred during transport or a retail employee might have dropped the carton.
Well, Malee juices are nice. I personally preferred them to other juices sold at the market. The company’s speculations as to how the box was punctured could be true and I am not tarnishing their reputation. This might also be a random situation that only happened to that particular box. I wish it was, but…Sigh.