Skip to content
0 Shares
Share
Tweet
This little girl from Rojanawit Malabieng school did something amazing that compelled me to write a post dedicated for her. However, Bangkok Post already made one so I thought of just copying and pasting it here instead. Laziness is starting to kick in. LoL. Credit goes to BKK Post. 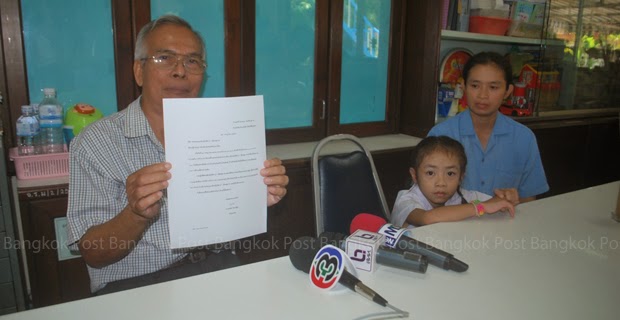 PHITSANULOK – A five-year-old earned praised Tuesday for her honesty and good deed after finding 30,000 baht and returning it to the owner.
Manus Chuayphen came to Rojanawit Malabieng school in Muang district on Tuesday to retrieve the money from Chitapa Niemsuphab, who found the cash in a plastic bag dropped in the school compound on Monday.
Pattacharami Niewsuphab, mother of the kindergartener, said her daughter told her while coming to pick her up that she spotted the money in a parking lot of the school. Chitapa took her to the place where she found the money and the two took it to a teacher.
The teacher later found that the money belonged to Mr Manus.
Mr Manus said he dropped the money when he came to take his niece home and contacted the school after finding out that he lost it. He came to the school Tuesday with his letter of appreciation praising the girl and her mother for their honesty.
After singing the national anthem on Tuesday morning, the school also commended Chitapa before other students and said the girl had set an example for others to follow.
Facebook Comments
0 Shares
Share
Tweet