Skip to content
0 Shares
Share
Tweet
MANILA — A second-year student of De La Salle-College of Saint Benilde was found dead inside a unit of One Archers Place in Taft Avenue, Manila on Saturday evening, June 28.
The student was identified as Guillo Cesar Servando, an 18-year-old sophomore Hotel and Restaurant Management student at De La Salle-College of Saint Benilde (DLS-CSB). 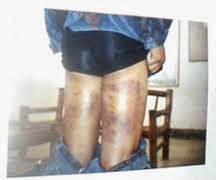 According to the report, the victim died after going through the initiation rites of the fraternity.
Three other students who go to the same school were later rushed to the Philippine General Hospital due to the injuries they sustained – possibly from the hazing as well.
The MPD-Homicide Division identified the fraternity that the four students were trying to join as Alpha Kappa Rho (AKRHO).
While some students who joined college fraternities and survived the ordeal of initiation rites now enjoy being part of the group, others are still haunted of the experience which left indelible marks in their body.
And for a family who suffered for their loved one’s early demise due to hazing, only time can tell if their world can still be called “complete”.
Facebook Comments
0 Shares
Share
Tweet