Skip to content
0 Shares
Share
Tweet
With so many social media posts our government officials took noticed of, this one is by far the most recent, and yeah, it involves a teacher.
Miss Careon’s post which went viral talks about her experience with the Bureau of Immigration Supervisor in Makati who told her to “Shut Up” when she inquired about her husband’s identification card.
“My husband was asking Carlo Salazar properly if I can just claim it as his wife without any letter of authorization and he stood up and said, “SHUT UP. Kailangan paulit-ulit ang tanong diba in-explain ko na! Why didn’t you tell your husband?'” she wrote.
“Everybody in that small room heard him. He was so rude. Even his co-workers were surprised but they just looked at me and then looked down. Nobody wanted to stop his temper. Even the eldest man in the room who appears to be a lawyer or maybe somebody with position didn’t say a word,” Carreon continued.
Read: Teacher criticized Immigration official who told her, ‘SHUT UP!’ 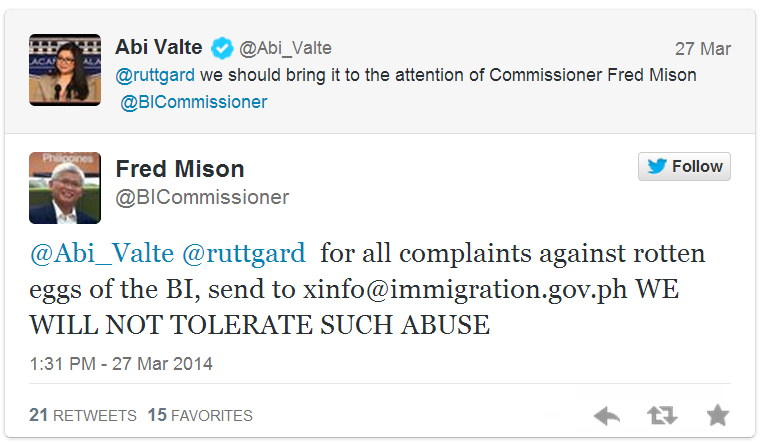 Bureau of Immigration Commissioner Siegfred Mison tweeted on Tuesday saying: “We will not tolerate such abuse,” referring to teacher Roselle Carreon’s plight that has earned over 2,600 shares on the social network.
“No amount of competence and efficiency can justify disrespectful behavior,” Mison also said.
Social media is indeed powerful. A satirical, serious, funny, or even a grumbling post concerning the government can bring government officials especially those in position to listen. So, it’s no surprising most people post their thoughts online. After all, it’s free, can be shared by many, and a whole lot effective than email or phone call I think.
Seriously, I’m happy Mison reacted. But I hope this incident won’t just end in scolding.
Facebook Comments
0 Shares
Share
Tweet