Skip to content
0 Shares
Share
Tweet
We know that everyone is looking forward for Songkran festival. It’s fun, it’s cool, and it’s a long holiday for heaven’s sake!
I remember my first ever celebration of this Thai traditional new year a few years ago. We really enjoyed the foam party celebration here in Phitsanulok. People were rowdy yet fun. Loud yet happy.
But since Songkran is also the most dangerous festival in the Kingdom, reported incidents of drunk driving and speeding are the reasons for unfortunate ones to leave the earth for good. Just yesterday alone in fact, forty-three people lost their lives and 502 were injured in a series of accidents. You can read the entire article HERE. It’s a battle for the government to at least alleviate the number of deaths.
Songkran is kinda like synonymous for “danger”.
Talking about foam party, two teens were electrocuted at a foam party in Phichit province. One of them died on the way to hospital. The other teen on the other hand is currently at the intensive care unit. 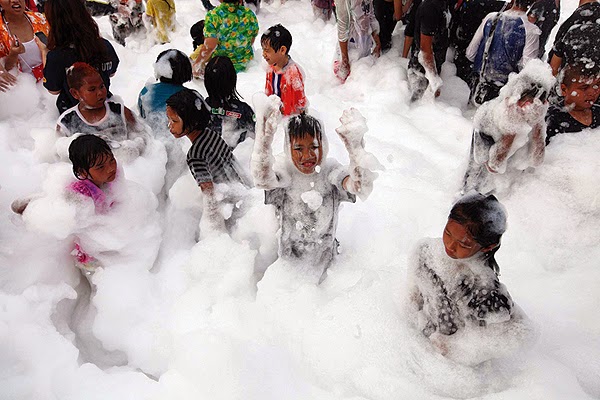 According to the Bangkok Post:
PICHIT: The mother of a 14-year-old electrocuted at a Songkran celebration organised by the Pichit municipality has vowed to bring harsh legal action against those responsible for the death of her son.
Chomwalai Yusawat, 45, mother of Preechakorn Boonpu, said yesterday she was furious the organiser of the event failed to ensure the safety of those taking part, Thai Rath online reported. She said her son was a member of the Pichit youth taekwondo team and had wanted to become a physician.

Preechakorn was splashing water with Songkran revellers at an outdoor foam party on Sunday afternoon when one of the foam machines short-circuited. He received a massive electric shock and was pronounced dead at the provincial hospital. Another youth, 16-year-old Patiwet Tiangkijsuwan, was seriously injured and admitted to intensive care.