Skip to content
0 Shares
Share
Tweet
It is true that people in position or authority intimidate us. Most of us simply bow our heads even if we are being humiliated. When we say something to defend ourselves, they normally cut us halfway. Thus, we stop talking. We listen. And we leave the place with a heavy heart.
This kind of situation is prevalent in our country. Those who are behind the glass act like they own the place – like they own us! They say what they want to say. They tell us to do things we already did. They ask for things or documents not on the list of requirements sometimes. In short, they make everything hard for us. I’m guessing they don’t know that we have feelings too.
I am not generalizing but I guess most will agree that there are a lot in position who are ill-mannered, disrespectful and rude.
Here’s what happened to one of our kababayan Miss Roselle Carreon who was received a “Shut Up” remark from one of the Philippines’ public servants. 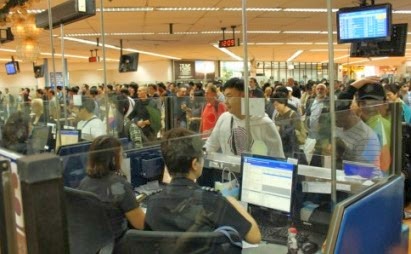 It was a Monday and my husband and I went to the Bureau of Immigration, Makati office. I had to pay some visa fees and the supervisor was NOT RESPECTFUL AT ALL. We were asking him about the  ACR I -card without my husband personally claiming that ID since he will be leaving the country before they even release it. My husband was asking CARLO SALAZAR properly if I can just claim it as his wife without any letter of authorization and he stood up and said “SHUT UP.Kailangan paulit ulit ang tanong diba inexplain ko na! Why didn’t you tell your husband?“Everybody in that small room heard him. He was so rude. Even his co-workers were surprised but they just looked at me and then looked down. Nobody wanted to stop his temper. Even the eldest man in the room who appears to be a lawyer or maybe somebody with position didn’t say a word.

When we told him that his behavior was inappropriate and that he shouldn’t say that to his clients he just said, “ I CAN SAY SHUT UP TO ANYBODY IF I WANT TO!“. I was so shocked. This is how the government specifically a Bureau of Immigration Official treats the people, both foreign and local.  Then my husband asked for his name but instead of giving us his name he stood up and said “CAN I HAVE YOUR PASSPORT”(while getting my husband’s passport from another person who is assisting in the release of documents) then he went straight to the photocopy machine and he was trying to copy the pages of my husband’s passport. For what reason? I don’t know, but seems like he is showing his authority and power over us. When he cannot copy the document because the machine was not working well he asked somebody else to do it for him and he sat down on his chair. He did not give his name so I asked another employee for his name. He kept humiliating me in Tagalog while he was copying my husband’s paper  “Paulit ulit ang tanong diba nasagot na bakit di mo inexplain sa asawa mo kailangan ba paulit ulit???” He said this TWICE.  He was so furious at us and did not even realize he was yelling for everyone to hear including foreigners!The foreigners around even asked me “Why is he like this? Why are they making it hard all the time for us?”Imagine the disgrace this government employee is bringing not only to his department but to OUR COUNTRY.

There were many foreigners that time also complaining about the fees and they asked me “Why do they charge express fees but I don’t really get an express service?” One foreigner even told the woman in window 1 “Why can’t you explain what these fees are for and you keep getting more money from me?” The cashier just kept silent while CARLO SALAZAR is being a disrespectful and ill-mannered public servant for the whole international audience to witness.

We left that office with his name written on a page of a photocopied list of rules that we must follow in claiming that ID. Yes, he told his assistant to photocopy that page for us to know the rules so we won’t ask him again. This action just showed how much he hated explaining and giving the information that most people especially foreigners don’t know about our complicated system!

We left the office to look for a higher authority where we can file a complaint against Carlo Salazar’s unacceptable behavior. I asked others where can I go or who the supervisor is and I was shocked again because they pointed me to him. “He is the supervisor, the one with the glasses named Carlo”So this explains why nobody can ever complain about this person.

I tried to contact the Civil Service Commission. They gave me a bunch of numbers which never answered. They kept passing me to somebody else. Finally a recorded voice answered me by giving me the website where I can file my complaint:www.contactcenterngbayan.gov.ph and it says that I will get a response after 48 hours.  For the meantime, I cannot sit back and relax for 48 hours, maybe if I am lucky I will get an answer.

I wrote this article to exercise my right as a citizen of this country and to expose the wrongdoings of this particular government employee whom we regard as a PUBLIC SERVANT. As long as there are people like him who do not serve sincerely and respectfully then the title: PUBLIC SERVANT will have no meaning.

I’m sure many of us have experienced this in one way or another, but we cannot expect change if we won’t take action. These abusive and ill-mannered employees or officials will be a disgrace in our government if we will just, (like what Carlo Salazar ordered us to do)—SHUT UP!

Having a bad day? Fine! But humiliating a citizen who pays her taxes to have you in position? Come on!