Skip to content
0 Shares
Share
Tweet
I’ve been riding my motorcycle in Thailand for about 5 years now. But during those times I’ve been speeding up without a license. I only got my driver’s license for my motorcycle and for the car on December 13 of this year. Had it not for the car that we recently bought, I’d probably still be riding my bike without a license.
Getting a driver’s license in Thailand.
Friends told me it’ll take two days in getting that card with your name and photo that says something like: You’re OK to drive now. The first day is for the seminar, followed by an hour of e-test. The second or last day is for the actual drive test where you will be watched closely by test administrators. I went to the Ministry of Transport here in Phitsanulok with copies of my passport, visa, medical certificate, so as my work permit and their expiration. You can’t get a license without those, so it is imperative to have them if you wanna apply.
After filling out a form I was ushered to a room where my eyesight in color identification was tested. And at about 9 am or so, we were ushered to another room to watch a video presentation of the do’s and don’ts of driving in the Kingdom. Then we listened to a talk from a guy working in that office.
I endured the almost three hours of talk of the speaker, of course in Thai, including the 30 minute or so video presentation. So, I was all smiles when we were told that we can now put something in our already empty stomach. However, the smiles were gone in an instant when I was told by the lady seating beside me that we will comeback at 1:30 pm for the continuation of the talk before we can take the test. Seriously, t’was like a whole day of torture. 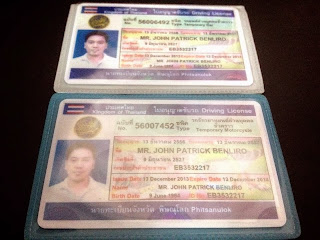 After having lunch, I hurriedly went straight to the mock road filled with signs to watch the people doing their actual drive test. Judging from my friends experiences and stories, parking was the worst. And seeing those people swinging their heads from left to right after the instructor told them they didn’t pass the stage one which was parking – I thought of returning home instead. I also thought that listening to the poor guy’s talk was better than doing the actual drive test. Then at about 2:30 pm, we were ushered to the next room to take the test. We were given 30 questions and an hour to answer.
I first tried the motorcycle. By the way, the questions for motorcycle and motor vehicle were actually the same. And although they have English version of the test for non Thai applicants, some of the questions were incomprehensible – or perhaps I am not good with rules too.
That was evident to the result of the test. Among the 39 applicants who took the test, I was the sole failure of the group. Everyone passed, showing green check on their computer screens. As for me, a blinking red thing that says: FAILED. I got 14 correct answers as oppose to 16 incorrect ones. Same thing goes to the car test. I got 16 correct answers and missed the other 14 questions.
The officer told me I can retake the test. But If I fail the second attempt, then I have to come back the next day.

What to do when you fail?

If you fail the test, you can review the questions that put you to shame. You can go back and re-read the questions that came out. Your answers will be shown together with the correct ones at the bottom of each question. Remember the questions and their corresponding correct answers because they will likely to come out again when you retake.

When my name was called again, I was praying to get a passing score. Luckily, I got 23 for the motorcycle and 25 for the car. We were all told to come back the next day for the dreaded actual driving test.

Second day
My friend Anthony Magayon accompanied me to the Ministry of Transport. We arrived at around 10:30 am. A few minutes later, my name was called to ride my bike. But since I didn’t bring my motorcycle, one of the test takers asked me if I would like to use his for a 50 baht charge. Heck yes, I said and so off I rode. In less than 3 minutes I was told to go to the second floor of the building where cards are issued.

Then after about an hour, my name was called again for the car driving test. Some of those who came before me were told to come back the next working days. I was excited but at the same time feeling a bit shaky that I might be asked to come back again too. I didn’t want to since I already cancelled my classes for two days just to get this “Bai Kap Ki.”

I played a music to help me stay focused and prayed for things to be on my favor while I slowly eased my way inside a parking space surrounded with obstacle course. Things went ok when the officer said, “You passed this stage.” And then I went to the second and third stage with ease. The officer told me to go to the second floor to pay the fees and to get the cards.

I gave the documents the officer at the actual driving test gave me to the counter at the second floor. She read them looking for the thing that says: Passed!  She then asked for 380 baht for both motorcycle and car driver’s license. Then my name was called for the photoshoot. I meant for the photo that they need to attached to the card. Lol. In less than five minutes, we were out of the building driving back home with two cards in my hand. This is now for real. I am indeed a licensed driver in Thailand.
Facebook Comments
0 Shares
Share
Tweet