Skip to content
9 Shares
Share
Tweet
I sometimes answer phone calls even if it is connected to the power outlet. It is wrong, I know. Let me tell you a story…
The story on Facebook a few months back about a man who died because his phone exploded while it was charging can be likened to the Thai man in Chantaburi province who died on the floor while his iPhone 4S was connected to the power outlet. 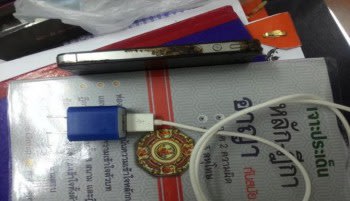 The victim’s father called the police after he found the body of his 28-year-old son laying on the floor with only his red short pants on. His left has was holding a black iPhone 4S that was still charging.
Local authorities suspect the deceased was using the phone while he was falling asleep. There was a burn on the left side of his chest, and the left hand holding the phone was so burnt his skid had stuck into it.
The caused of death is still unknown but it can be from electrocution, same thing the police initially thought. With his phone’s plug having the blue color, it can be said that he’s not using a standard-issue iPhone charger. As we all know, fake stuff is always a dangerous thing.
The investigation is still ongoing.
Facebook Comments
9 Shares
Share
Tweet