Skip to content
0 Shares
Share
Tweet
Saint Nicholas Church Foreign Community (SNCFC) in Phitsanulok, Thailand, a small organization of foreigners living in the province, organized an assembly on Thursday to students of Saint Nicholas School – the only Catholic school in Phitsanulok. They informed the students the needs of the typhoon victims, as well as the terrible condition they are now experiencing. 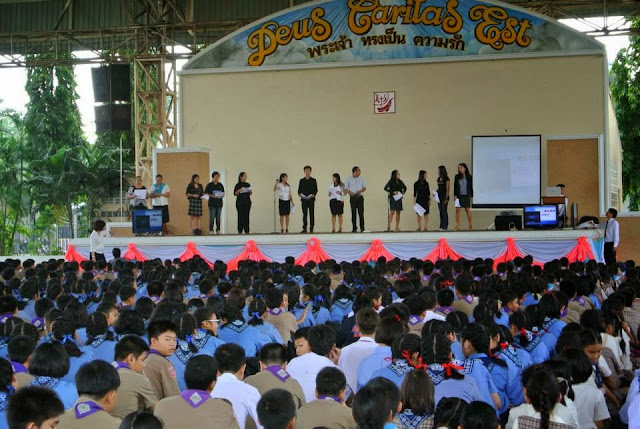 The community also showed a video presentation of the “Yolanda aftermath.” People were hungry, buildings and houses were flattened, and dead people were everywhere.

With images so strong, one can’t help but be in tears.

After watching the video, SNCFC performed the songs “Heal our land” and “You raise me up.” These powerful songs sent them to tears again. And just before the gathering ended, everyone was touched; everyone felt the need to help.
The community was able to collect at least 40,000 baht when they knocked the hearts of students. Many thanks to Saint Nicholas Rector Father Prasert Sitti, as well as to students and the staff who offered prayers for the Philippines.
Just this week, Chalermkwansatree School donated at least 60,000 baht. These donations from schools in Phitsanulok will greatly help our fellowmen who until now, continue to suffer due to lack of food and water supply.

Read: A Way To Thank Chalermkwansatree School For Their Help To Typhoon Victims In The Philippines
Thank you all so much for your help. May God bless you more!