Skip to content
0 Shares
Share
Tweet
A 10 year-old Chinese student in the southwestern city of Chengdu jumped 30 floors to his death after his unsuccessful attempt in writing a self-criticism letter ordered by his school teacher, state media reported Thursday.
According to an unnamed neighbor reported by China National Radio (CNR), the fifth-grade student was asked to write a 1,000 character apology by his teacher for talking in class. 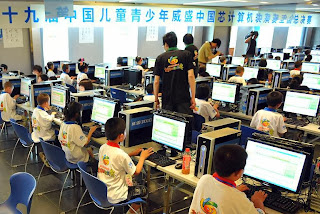 The teacher allegedly told the boy to jump off the building after his failure to complete the work.
“Teacher, I can’t do it,” was found written in one of his textbooks, CNR said. “I flinched several times when I tried to jump from the building.”
The boy’s body smashed onto the car parked beneath the flat where his parents live.
“The teacher forced our kid to jump off the building,” says the banner of the furious relatives of the boy.
“The police investigation is still underway,” an official of Jinjiang district said.
China is known as a country that practices strict discipline in both education system and culture. Children are always under pressure so as to obey instructions.
“How can a guy like this be a teacher?” wrote one poster. “Who gave him the right to speak in this way? Why does the student have this kind of blind obedience?,” said a Sina Weibo user, a Chinese equivalent of twitter.
However, the school said the child and some his classmates were ordered to write a review of their behavior after disturbing a speaking contest.
He died “by accident”, it said.
Facebook Comments
0 Shares
Share
Tweet