Skip to content
0 Shares
Share
Tweet
Reports about innocent people losing their lives in the seemingly never ending battle between the government forces and the militants in the south isn’t showing no signs of stopping. 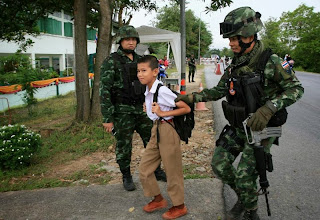 Earlier today, a teacher was killed by a stray bullet when militants who attacked Ban Cho Kuyae School in Pattani’s Sai Buri district had a clash with the rangers, reports said
Militants set buildings on fire which were used as the operations base for troops from Rangers Company 4202 by throwing bombs and spraying fuels to the three houses in the compound.
Rangers opened fire to the attackers, and one of them was hit. Unfortunately, a stray bullet hit Waena Bungo, 55, a teacher in the said school who was sleeping in the nearby house in the compound, killing her instantly.