Skip to content
0 Shares
Share
Tweet
The government of Thailand is thinking or should I say considering a 500 baht charge to every foreigner entering the Kingdom. It won’t be this year, but they plan to have it implemented in January next year.
According to Mr. Pradit, officials from the Ministry of Tourism and Sports, the Ministry of Public Health and the Royal Thai Police had discussed the matter and all agreed with the idea.
“The tourism and sports minister (Somsak Phurisrisak) told me that every other country is collecting entry fees from foreigners,” Mr Pradit said. 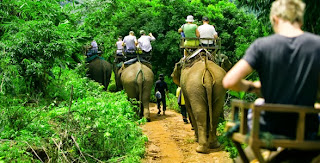 “The money will be used for many purposes by the tourism, health and foreign affairs ministries, and the Immigration Bureau.”
But tour operators and those working in the tourism industry didn’t like the government’s proposed plan.
“It lacked transparency and would significantly hurt the tourism industry,” Samphan Panphat, adviser to the Thai Hotels Association (THA) said.
“The plan will affect the tourism industry, both in the short run and the long run, because tourists will feel bad about Thailand and they may feel they are being cheated,” Sitdiwat Cheevarattanaporn, chairman of the Association of Thai Travel Agents (Atta) said.
What can I say? Well, I can’t help but agree to the tour operators’ sentiments.
Travelers especially the frequent ones will find this fee a ripped-off. I mean, just because they want to increase the quality of tourists entering Thailand doesn’t mean that charging the tourists will greatly help their cause. I seriously doubt that!
Facebook Comments
0 Shares
Share
Tweet