Skip to content
0 Shares
Share
Tweet
17 people on board, including two pregnant women and the driver, lost their lives when the pick up truck they were riding skidded off a road and hit a tree in Buri Ram Yesterday. It was reported that the truck was carrying Laotian migrant workers who hitched a ride from Samut Prakan to the border province of Ubon Ratchatani. 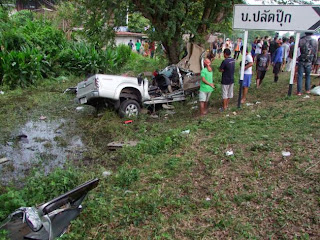 Six of the other seven passengers are seriously injured. The only passenger who fit enough to testify was 30 year-old Phu Liamwonglad.
“There were 24 people on board including the driver,” Liamwonglad said. He and his wife paid more than 2,000 baht for the trip.
34 year-old Chawalit Thavornkham, the driver of the truck, was believed to have taken an alternative route to avoid police officers.
“The main road is more convenient, but there are police checkpoints,” a source said.
“A methamphetamine tablet was found on Chawalit’s body, as well as a bottle of alcohol next to his seat,” Deputy police chief Colonel Prayut Phokaeokul of Buri Ram said.
Facebook Comments
0 Shares
Share
Tweet