Skip to content
0 Shares
Share
Tweet
A 12 year-old student in Nevada shot and killed his teacher with a handgun and wounded two other students before taking his own life.
The students from Sparks Middle School who were wounded in the incident were taken to Renown Regional Medical Center near Rio. One of the wounded students had an emergency surgery, acting Sparks police chief, Tom Miller said.
The slain teacher was identified as 45 year-old Michael Landsberry. 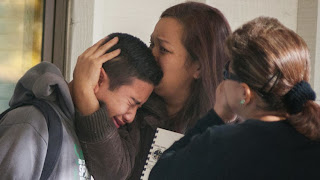 “To hear he was trying to protect those kids doesn’t surprise me at all,” his sister-in-law, Chanda Landsberry told the Gazette-Journal. “He could have ducked and hid, but he didn’t. That’s not who he is.”
WHY ARE YOU LAUGHING?
“I heard him saying, ‘Why you people making fun of me, why you laughing at me,'” student Michelle Hernandez told the paper.
Report said the boy was being laughed at. In my humble opinion, the incident obviously showed signs of bullying.
With the string of shooting rampages especially in school, it scares me to note that those who experience being bullied are retaliating differently now.
Source
Facebook Comments
0 Shares
Share
Tweet