Skip to content
0 Shares
Share
Tweet
How would you feel if you want to visit a place yet there’s a sign that says you aren’t allowed to get in? I’m assuming you know exactly what I’m referring to. If not, then let me tell you. It’s about the racist sign posted at one of Beijing’s restaurants saying Filipinos among others won’t be received at the said eatery. 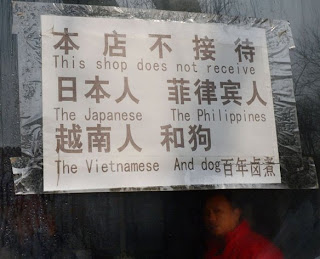 This photograph, which I don’t claim as my own, has gone viral in Vietnamese language forum and also in the Philippine newspapers and websites. I was shocked as hell when I saw this the first time with “dog” as the last word attached to it which made me feel that the Japanese, the Philippines and Vietnamese are being likened to it. Or perhaps it was really their intention in the first place.
The sign “ignited online fury” in Vietnam, claiming that this is one of China’s extreme nationalism that shouldn’t be commended but condemned. One commenter said, “It’s not patriotism, it’s stupid extremism”.
I couldn’t agree more from all the comments I read. Technically, it’s like teaching younger kids to hate those you have disputes or misunderstanding with.
Anyway, China as we know it is locked in a long standing territorial disputes with the Philippines including Japan and Vietnam, claiming most of the islands in the South and East China sea as their own. The sign can simply be just the thought of the restaurant owner. But then again, it can also be the thought of them all.
Facebook Comments
0 Shares
Share
Tweet