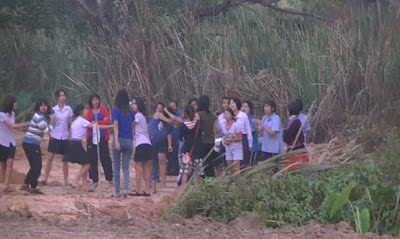 A Thai friend liked a photo posted by Phitsanulok Hotnews on their facebook fan page. I thought it was just a random picture of students’ gathering in a normal day so I immediately scrolled down to see more of my news feed. But I saw the same picture when I opened Bangkok Post website a few minutes before this posting. It says “Teenage brawl in Phitsanulok”. I didn’t take notice of the two students who were having a brawl when I first saw it. If you will take a closer look both were actually pulling each other’s hair.
I have seen quite a few videos on youtube about girls going on a rampage and hitting each other like crazy. Some were in their uniforms and doing it at school – much to the delight of people who couldn’t careless while phones were on for video recording.
Anyway, these girls in their teens arrived on their motorcycle and gathered around a construction site in Phitsanulok province. Locals thought the students were just hanging out and having a good time. But everything changed when two of the girls started to pull each other’s hair with occasional punches and kicks. Good thing there were people exercising at the park nearby. They disbanded when one adult threatens them he would call the police.
The reason behind the fight was not known.
Facebook Comments
8 Shares
Share
Tweet