Skip to content
0 Shares
Share
Tweet
I believe there are lots of Filipino teachers who made and are still continuing to make an impact in more ways than one to the lives of their Thai students. There are others as well who decided to leave Thailand in search of greener pastures, yet left a legacy that will forever be cherished by their students and colleagues alike. 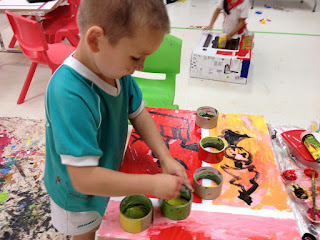 Isn’t that really a thing of a teacher – to mold the minds of their learners, help them in achieving their full potential and make a difference in their lives?
Meet our fellow Filipino teacher April ‘Josh’ Jonel Rojas of Kajonkiet International Shool in Phuket. He is the brain of “Paintings for Charity Art Auction” that has been running for three years now.
“About three years ago, I was visiting an orphanage with a friend and I was so saddened. I wanted to do something to help”.
“I didn’t have money to give these children myself, so I came up with this idea of an art auction to gather donations,” Mr. Roxas was quoted saying in The Phuket News.
The students’ creations are then auctioned to parents of students in the school.
According to Mr. Roxas, he didn’t have the budget to cover the cost of utensils, paints and canvasses when he proposed the idea to his department director.
“But after the auction, the director was proud of the children and glad to see the parents so happy. One parent even spent B15,000 on a single painting”, he said.
Mr. Roxas hopes that his art auction will also inspire other schools to do a similar move.
“I hope we have inspired ordinary people like me that they can do something extraordinary for the less fortunate,” he added.
Facebook Comments
0 Shares
Share
Tweet