Skip to content
0 Shares
Share
Tweet
The Philippines was labelled as a “battered nation” in an article I read on Yahoo news when Manny loss his match against Marquez on the 8th, and the Azkal’s defeat against Singapore on the 12th. But we just made a come back when Donaire, the Filipino boxer known as “the Flash”, knocked out cold Arce today, a boxer who hailed in the country where Marquez is from as well – in Mexico. 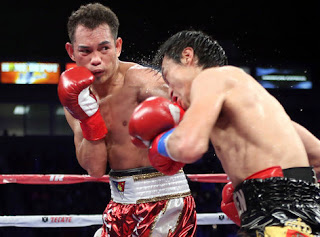 Still, in yet another Yahoo article a day before their fight, Arce confidently said Donaire will suffer the same fate as Manny on the ring. That Donaire isn’t a monster as what most Mexicans pertain him to be. But it seems like Donaire is a monster after all especially on the third round when Arce accepted several punches from the flash that knocked him out cold.

My thoughts? You never know what the future holds. Therefore, it is better to do it before bragging about it. Congratulations Donaire. You deserved it.