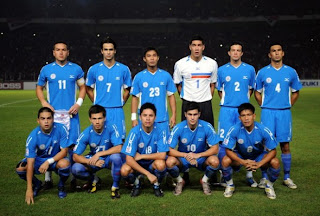 Two or three years ago, football in the Philippines was not popular like basketball, seldom played by Pinoys and doesn’t receive the accolade the latter is receiving. Our powerhouse neighbours weren’t scared of us either; looking at our team a not tough team to beat.

But things are changing now. Pinoy fans go crazy on how Azkals (Philippine Football Team) makes a name for itself by defeating in friendly matches the stronger and fancied countries like Kuwait and Singapore; and even securing the second best ranked football team in Southeast Asia from Thailand, losing only to Vietnam who still holds the top spot.

And that’s not the end of it. In fact Thailand coach Winfried Schafer expressed his happiness when he flew to Cebu to watch the winning game of Azkals againts Singapore, knowing that two of the Azkals best, Neil Etheridge and Stephen Schrock won’t be playing in the Suzuki Cup tournament. Coach Michael Weiss of the Azkals was quoted saying, “He showed good demeanour after we told him that Neil and Schrock will not play for sure, he even asked if this is true and gave a big thumbs up.”
Sure thing. “They are scared of the Azkals.”
Facebook Comments
0 Shares
Share
Tweet