Skip to content
0 Shares
Share
Tweet
Schools hiring foreign teachers will receive a subsidy from the Education Ministry as part of efforts to boost students’ foreign language proficiency.
Initially, schools which employ native English-speaking teachers will get a subsidy of 10,000 baht per head per month, and 5,000 baht per head per month for teachers of other languages, Chinnapat Bhumirat, secretary-general to Office of Basic Education Commission, said.
Those with native English-speaking teachers would receive higher subsidies and the amount would vary depending on the cost of living and distance from Thailand of their home countries.
“The amount is not much but it will help ease the schools’ financial burden as 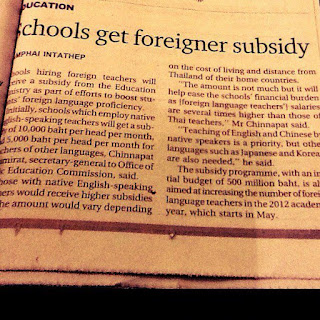 “Teaching of English and Chinese by native speakers is a priority, but other languages such as Japanese and Korean are also needed,” he said.
The subsidy programme, with an initial budget of 500 million baht, is also aimed at increasing the number of foreign language teachers in the 2012 academic year, which starts in May.
Source
Facebook Comments
0 Shares
Share
Tweet