Skip to content
0 Shares
Share
Tweet
Come on, don’t say you never pre-judge people by their appearance. More often than not, we do it even if we don’t mean any harm. I stand firm that no one is excluded on the list. Human nature? Then human nature it is. But are we at most times correct with our judgements? 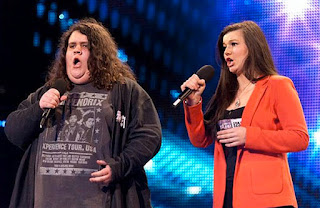 As a fat boy, Jonathan is embarrassed by his size. It affects his confidence and his way of looking at the brighter side. When he and Charlotte, his friend, joined Britain’s Got Talent, everyone including Simon was like “This is going to be another boring performance.” But when they started singing they can’t believe their eyes and ears because the duo standing in front of them were amazing. The laughs and scepticism quickly turned to tears and applause.

Check out the end of the video when Simon told Jonathan that he has an outstandingly great voice and should dump Charlotte, though she too can sing. His response? “We’ve come on here as a duo, we’re gonna stay here as a duo.” The singing was amazing but the friendship? PRICELESS. I have goosebumps all over.