Skip to content
0 Shares
Share
Tweet
Steve was an adopted child. He was already working when he decided to look for his birth mother. He searched online for four years hoping to find her but to no avail. Then he noticed he was spelling his mother’s last name wrong. He fixed it and got a hint where his mother was staying at.


He was telling his co-worker about the last name’s mixed-up, using Talladay instead of Tallady. “You mean like the Chris Tallady that works here, the one had cashier upfront? his co worker said. The manager then looked for the home address and found out it was a match. He did not know what to say, and so he waited. 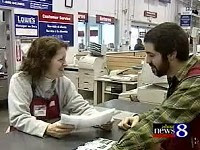 The adoption agency worker broke the news to Chris a week after that, explaining only that a co-worker named Steve she given up for adoption 22 years ago, was her son. Although there are so many Steves who work at the Plain Field Avenue Lowe’s, his mother never doubted who her Steve was. Perhaps that is the what we call mother’s intuition.


Click the link below and watch the video of a cashier and the delivery guy, who worked together for eight months, yet never suspected their relationship as mother and son.